Our annual children’s prevention camp took place in July in Bucsin. We were thankful for nearly 50 participating children this year, and a strong group of volunteer support staff. One of the volunteers, Boróka, originally came as a child participating in the Bonus Pastor Camps years ago. Later she went into ministry and began coming back to volunteer at the children’s camps several years ago. We think her personal experiences concerning this year’s camp give us a good insight into the camp ministry. Here is what she wrote:

“After six years, I am again in this camp…” I kept repeating to myself on the day of my arrival. “Unbelievable!” I thought, “I see Orsi, whom I met in this camp, and I can’t believe my eyes, Anna is coming towards me, who has been a participant in the last mini children’s camp which was held here in this same place, and now she’s here as a colleague. Just like me!”
I grew up in these camps, and I remember well the evening stories about Hudson Taylor, and how I decided that I wanted to work in ministry, and 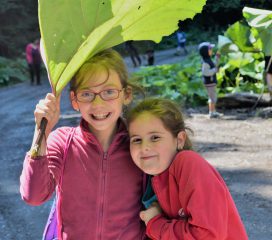 Children enjoy hiking in a nearby forest.

how I waited for this camp every year. What I only felt back then, now I can put it into words: The BPF Children’s Camp is a little teaser of God’s Kingdom. The place, where it is good to be, and the reason for this is that it is good to be near God. These are the thoughts which I started the camp with: God led me back here for some reason, and there was a powerful desire in me to give to the arriving children what I got: the love of God. Just this, simple and tangible.
On the arrival day, it already became clear that we’re facing a challenge. There were significantly more boys coming, than girls, and there were significantly less male colleagues, than female. Despite this, we managed to get on very well. After explaining the camp regulations and occupying the accommodation, we played some games to help us get to know each other. Though we mixed up the names for a while, we managed to learn all by the end of the camp. After dinner, which we hungrily waited for, theoretically we would have finished the day with common singing, but practically we read stories in every room, but that of course still didn’t bring dreams to the children…
The daily program during the week was: musical wake up call, morning exercises, breakfast, forenoon Bible lessons, learning of Bible verses, then after a short break, we continued with activities in small groups. Every small group created their own crest, each group guessed their names. During the craft activities, the small groups prepared musical instruments, which they used later together, and then they drew their animal-families. On Friday morning, two young volunteers held an archery presentation, and the children had the opportunity to try their talent as well: some shot “pigs”, some “rabbits” “for dinner”. In the afternoon the children participated in a forest trip, while playing war of numbers, fishing for plush-animals, and of the hours spent playing in the mountain stream that runs next to the camp, we visited the salt mine together, then organised a common adults-children football tournament cup. The evening program consisted of presenting “superheroes”, which the colleagues did by acting or by talking about them. The lives of Gáspár Károli, Martin Luther, and John Calvin were presented, but the program also included watching films. One night we watched The Croods while eating popcorn. 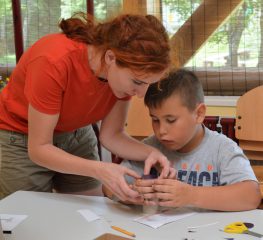 Boróka helps a child with a craft while at camp.

It is difficult to draw up my experiences, I’m afraid of getting lost in the details. Because I can talk about the daily programs, including the Bible studies, the afternoon games, the nighttime story telling, etc but all of these just frame the meetings, which give the essence of my experiences. I remember the chats, the laughter, having fun, or the moments when an aggressive child is completely calmed by a hug, or how it shocked me to see amazement on the faces of some children, because of getting attention. I saw the family drawings, the snake, spider and shark families, and I’m still thinking about how I wish I could have more professional counselling knowledge. I can say, it would be so good to see these children more than once a year for a week, but to guide them through the rest of the year as well, to visit them so that they can feel and know, that they are remembered by us and that they are important.
By the end of the week, I thought that although many times I felt I was not enough and helpless, our weakness and our tiredness was complemented by Him, and He made this week blessed.”

We want to thank our supporter and sponsors from around the world for engaging in this ministry with us. Your prayer was a fundamental part of the “behind the scenes” work of the camp. Your support and funding made it possible for us to host the camp again this year.